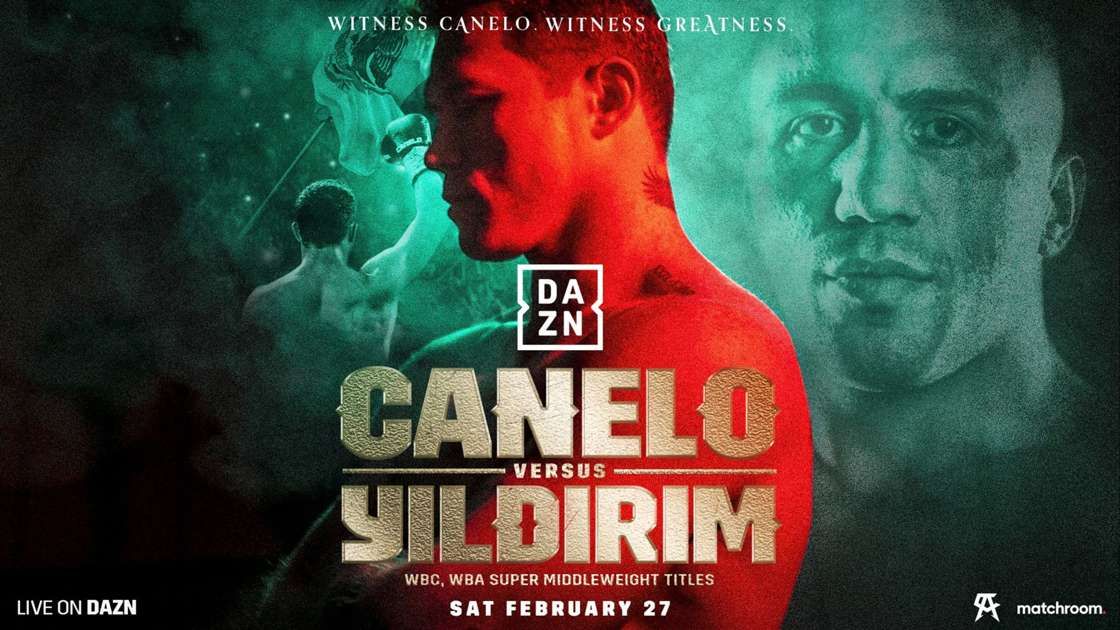 After fighting just once last year, Saul ‘Canelo’ Alvarez returns to the ring for his second bout in barely two months, with the biggest draw in boxing set to defend his Super Middleweight titles against Avni Yildirim. It’s the Mexican legend’s first fight of 2021, and you can read on as we explain how to watch a Canelo vs Yildirim live stream right now and catch all the boxing action online from anywhere in the world now.

It’s rare these days that we get to see a star as huge as Canelo get back into the ring so soon after his last fight, and some are already looking ahead to a slated Cinco de Mayo blockbuster unification clash between the WBC and WBA Super Middleweight champ and Billy Joe Saunders.

But Canelo insists that he isn’t underestimating tonight’s opponent, the 29-year-old from Turkey. This is quite a return for Yildirim, who hasn’t fought for two years only to be handed the biggest opportunity of his career, as the WBC mandatory challenger.

He’s been training under Joel Diaz, who claims to have completely overhauled Yildirim’s fighting style with Canelo specifically in mind. It’s a big claim, which hopefully turns out to be more than just hype.

Canelo put in a commanding performance against Callum Smith in December, defeating the Brit by unanimous decision. Will he defend his titles tonight, or can Yildirim spring an upset for the ages?

Follow our guide below to catch this unmissable fight on Saturday – here’s how to watch Canelo Alvarez vs Avni Yildirim online and get a Canelo vs Yildirim live stream, no matter where you are in the world right now.

Can I watch a free Canelo vs Yildirim live stream?

No – but you can get the fight dirt cheap in some parts of the world.

The cheapest way to watch Canelo Alvarez vs Avni Yildirim is via DAZN, which is offering the fight to customers as part of their subscription.

DAZN UK is currently available for just £1.99 a month! It’s also equally cheap to watch Canelo Alvarez vs Avni Yildirim in Australia or New Zealand, where DAZN is currently being offered for the introductory discount price of just $2.99 a month, compared to the steeper DAZN US price of $19.99 a month.

Boxing fans in Canada are also in luck, as while it costs 20 bucks in the Great White North, you can get a FREE trial of DAZN in Canada – one of the only countries we’re aware of where the service offers a trial on the house.

The fight is also available to watch on PPV through North American cable providers for $49.99, which is a much more expensive alternative (though DAZN will gift you an access code for four months of ‘free’ access by way to compensation if you opt for this route.

Canelo vs Yildirim live stream: how to watch the fight online with DAZN from anywhere

Streaming service DAZN (pronounced ‘Da Zone’) has the rights to show the Canelo vs Yildirim fight in over 200 countries, including, the US, UK, Australia, New Zealand and Canada.

Coverage of the main card starts at 7pm ET/ 4pm PT in the US and Canada, 12am GMT in the UK, and 11am AEDT in Australia on the streaming service.

The headline act is expected to start around 11pm ET / 8pm PT on Saturday night in the US, 4am GMT in the UK on Sunday morning and 3pm AEDT in Australia on Sunday afternoon – though this of course depends on how long the earlier fights last.

A DAZN contract in the US will set you back $19.99 per month, or $99.99 for the year. Big cable providers including Comcast, Charter, Cox, Optimum, Verizon, DirecTV and ATT are also offering the fight on PPV for $49.99, but that’s a far more expensive option.

DAZN Canada is priced similarly at $19.99 per month, however a 12-month subscription comes in at $150. It’s one of the few places that offers a FREE DAZN trial, though

And a DAZN subscription is currently dirt-cheap in the UK, Australia and New Zealand.

In the UK, it’s priced at an ultra-affordable £1.99 a month, while it’s available for a discount initial price of $2.99 a month in both Australia and New Zealand.

Out of the country? DAZN subscribers who find themselves abroad for the fight will find they can access their accunt just like they would at home – wherever you are in the world, all you need is the help of a good VPN.

However, those looking to subscribe to DAZN for the first time may find the service manages to effectively block certain VPNs at the point of creating an account. VPNs most notably encounter obstacles starting from scratch with DAZN Canada, though in other places like the US our general sports VPN recommendation was working fine in 2021.

And if you’ve already got an account, a VPN should work wherever you are to help you regain access to pre-existing subscriptions.

If you’re abroad and discover that your usual coverage is geo-blocked, then the only alternative that we know is to use a VPN to dial in to a country that is showing the fight – though note the caveats above.

The software is perfect for this as it allows you to change your IP address and appear to be in a completely different location – and all through a safe, encrypted connection. Here’s how to get started.

ExpressVPN is the world’s top VPN
We’ve tested all of the major VPN services and we rate ExpressVPN as the absolute best. It’s compatible with loads of devices including iOS, Android, Amazon Fire Stick, PlayStation, Apple TV and such, and we found it secure, speedy and simple-to-use.

Another great perk is the fact that it comes with a 30-day money back guarantee and 3-months FREE, so you can see if it’s right for you with no strings attached.

Once you’ve downloaded the software, just follow the prompts to install it then select the location you want to relocate your IP address to – it really is that easy.

Remember, there are loads of benefits to using a VPN beyond just helping you regain access to streaming services and content from abroad. One of the biggest is security: by using encrypted tunnels, VPNs give you a robust first-line of defense against cybercriminals and government snooping. This makes everyday tasks like online shopping and banking much safer, and many people choose to use one for that reason alone.

What is DAZN? All about the sports streaming service

Pronounced ‘Da Zone’, DAZN is a sports-centric streaming service that launched in 2016 and is now available in over 200 countries all around the world including the US, Canada, UK, Australia and New Zealand.

Its offering varies by region, but as an idea, it owns the rights to the Premier League, Champions League, NFL, cricket, snooker, rugby union and more in Canada – one of its original and biggest markets.

It’s also seeking to challenge the pay-per-view boxing hierarchy, and is landing an increasing number of coups.

The price of DAZN also varies depending on where you are in the world but is generally competitive – in newer markets like the UK, an introductory offer is still running that has it available for just £1.99 a month, while in more established markets like Canada it costs CAD$20 a month. It also offers a FREE trial in some areas and works with pretty much any modern device imaginable.

It’s a great all-round offering, with the only real drawback being that it doesn’t play overly nice with VPNs in all territories. As we’ve said, Canadians abroad will find they can’t sign up for DAZN even with the help of a Virtual Private Network – though existing account holders (with or without a subscription) will find they can access the service fine.

It’s not universally the case, either, as our latest testing reveals DAZN US is accessible using a VPN across the board.

Canelo vs Yildirim time and date

The night’s main card is set to get underway at 8pm ET/5pm PT in the US and 1am GMT / 12pm AEDT / 2pm NZDT in the UK, Australia and New Zealand.

Ring walks for the main event are roughly expected to be as follows.

Who is Saul ‘Canelo’ Alvarez?

Arguably the biggest star in boxing right now, Canelo notched up a fearsome record of 44-2 with 12 KO at amateur level, before making his debut as a professional in October 2005. Six years later he would claim the vacant world junior middleweight title against Matthew Hatton.

Over the course of a 57-fight pro career, Canelo has held world belts in four weight divisions, with 36 of his wins coming via knockout.

Alvarez has just one defeat to his name – a loss to Floyd Mayweather back in 2013 – but he nevertheless put that disappointment behind him to establish a well-earned current reputation as the world’s best pound-for-pound boxer.

This fight marks Alvarez’s first fight since defeating Callum Smith by unanimous decision in December 2020, a feat that saw him claim the WBC and WBA Super Middleweight belts.

Who is Avni Yildirim?

A year younger than his opponent but vastly less experienced, Avni Yildirim has 23 professional fights under his belt and boasts a 21-2 record, with 12 of those victories coming by knockout.

The second of his two defeats had more than a touch of misfortune about it, with an accidental headbutt in the 10th round of his thrilling fight against Anthony Dirrell handing his opponent the win by technical decision.

That was in February 2019, and Yildirim hasn’t fought since then.

There’s also a heavyweight contest to look forward to, pitting Zhang Zhilei against Jerry Forrest, who returns to the ring for the first time since testing positive for a banned substance in the aftermath of his defeat to Carlos Takam last July.