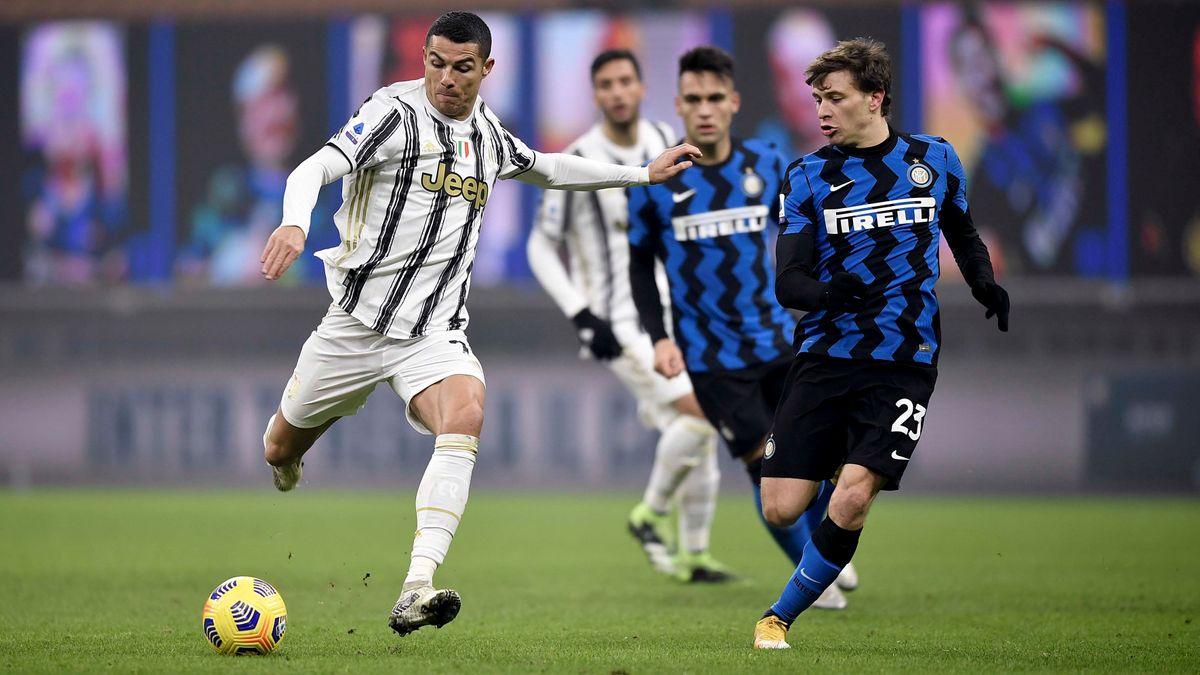 We’re expecting fireworks tonight as Antonio Conte’s Inter Milan side host Cristiano Ronaldo and Juventus in the first leg of this mouth-watering Coppa Italia 2021 semi final clash. The reward for the winner following next week’s second leg in Turin will be a showdown in the final with the winners of Napoli vs Atalanta, so read on for our full guide to getting an Inter vs Juventus live stream and watch the Coppa Italia semi final online, no matter where you are in the world right now.

Having seen off local rivals AC Milan in the last round thanks to a dramatic last minute winner from Christian Eriksen, Inter will now be dreaming of finally ending a barren run of 11 years since lifting their last trophy.

However, they now arguably even more formidable opposition as they welcome the Old Lady to the San Siro, with le zebre making their way into the last four of the tournament in much more comfortable style, easing past Serie B hopefuls SPAL in the quarter finals last week.

Tonight’s clash in Milan comes just a fortnight after the two teams met in Serie A action, a match which saw Inter further dent Juve’s title defense with a 2-0 win. Both teams come into the clash in winning form, however, with Inter handing out a 4-0 thrashing to Filippo Inzaghi’s Benevento and Juve easing past Claudio Ranieri’s Sampdoria 2-0 at the weekend.

Don’t miss any of the action from tonight’s big Italian football clash – just follow our guide below as we explain how to watch an Inter vs Juventus live stream for the Coppa Italia semi-final derby. Anyone in Italy can even watch Inter vs Juventus free online tonight, courtesy of the country’s national broadcaster, Rai!

Anyone located in Italy will find that national broadcaster Rai has the rights to the Coppa Italia and will be airing tonight’s Inter vs Juventus match 100% free.

You can watch on either linear TV or online, with coverage starting on Rai 1 at 20:30 CET ahead of a 20:45 kick-off local time in Milan.

Rai offers a completely free and open online streaming platform, which means anyone in Italy can get a 100% free Inter vs Juventus live stream for this clash. The is completely open, so you won’t find yourself having to hand over sensitive personal information like where in the country you live to gain access, either.

Italian residents currently abroad can also tune in to their home coverage with a simple tech trick. Allow us to explain.

If you’re abroad and can’t bear to miss out on watching coverage of Inter Milan vs Juventus live from your home country, you should bear in mind that many of the services and websites you normally use to watch Italian football are geo-blocked.

But don’t sweat it. With the option of a VPN, you can tune into Coppa Italia fixtures as you normally would, no matter where you are in the world – it’s really easy and perhaps most importantly, ultra-affordable.

ExpressVPN – get the world’s best VPN
We’ve put all the major VPNs through their paces and we rate ExpressVPN as our top pick, thanks to its speed, ease of use and strong security features.

It’s also compatible with just about any streaming device out there, including Amazon Fire TV Stick, Apple TV, Xbox and PlayStation, as well as Android and Apple mobiles.

Once you’ve chosen and installed your VPN of choice, simply open the service’s corresponding app, hit ‘choose location’, select the appropriate country and you’ll be able to watch the broadcast as if you were back at home.

Inter vs Juventus live stream: how to watch Coppa Italia 2021 in the UK

While subscription service Premier Sports has live broadcast rights for Serie A football in the UK, BT Sport has bagged exclusive rights to show the Coppa Italia in the region.

Coverage of the Inter vs Juventus semi-final showdown is pretty unfussy, getting straight into the action without any build-up at 7.45pm GMT kick-off time on BT Sport ESPN.

Subscribers can watch BT Sport online, either directly through its website or by using the BT Sport app – available for iOS and Android as well as on consoles, Apple TV, Now TV devices, and select Samsung smart TVs.

For those who don’t want the commitment or cost of a full-fat BT Sport subscription, there’s now a BT Sport Monthly Pass option, which let’s you pay £25 and cancel whenever you want.

If you’re a BT Sport subscriber but find yourself outside the UK right now, you’ll need to download a VPN and follow the instructions above to live stream the game.

How to watch Inter Milan vs Juventus: live stream Coppa Italia soccer in the US

ESPN has the US rights to this season’s Coppa Italia and this quarter-final clash between Inter Milan and Juventus match will be aired exclusively on its ESPN+ streaming service. Kick-off is at 2.45pm ET / 11.45am PT.

The service is seriously great value at just $5.99 a month. In addition being the US home of the many of the biggest English soccer matches, including today’s Community Shield, ESPN+ also features loads of games from the NBA, NHL, MLB and MLS, plus college sports, tennis, golf, cricket, rugby, Top Rank boxing, UFC and more.

For the ultimate value, grab a combined ESPN+, Disney Plus and Hulu bundle for just $12.99 a month, which gets you loads of great entertainment and family-friendly content in addition to all that sports action.

DAZN costs $20 a month or you can save a few bucks by signing up for a $150 annual subscription, and it also offers the Premier League, Champions League and Europa League.

But best of all, it offers a FREE 1-month trial deal that let’s you try in for free, meaning there’s essentially a free Inter Milan vs Juventus live stream on offer in Canada today.

It’s not great news for Italian soccer fans Down Under, but there may be an option. Italian broadcast giant Rai has a number of international offshoots, including an Rai Australia branch, which is listed as broadcasting the match on the Rai International website

Kick-off is at 6.30am AEDT on the morning of Wednesday, February 3.

The alternative is to use one of our best VPN services as described above. This will residents of other countries where the match is being shown to tune back in to their usual coverage, even if they’re abroad in Oz right now.

Can I watch Inter Milan vs Juventus online in New Zealand?

Unfortunately, no Kiwi broadcaster is confirmed to be showing this big match sadly.

If you’ve read the rest of this article, you probably know the alternative route by now. You could give a VPN a try as per the instructions above if you’re in NZ from a country the game is being shown today.

Inter will need to make do without star striker Romelu Lukaku and full-back Achraf Hakimi, who are both suspended, while Matias Vecino and Danilo D’Ambrosio also miss out due to injury.

Juventus manager Andrea Pirlo has less selection issues to deal with, with  Argentine star Paulo Dybala the only noticeable absentee for the Old Lady.

Academics are leaving colleges. Will they arrive to startups subsequent? – TechCrunch