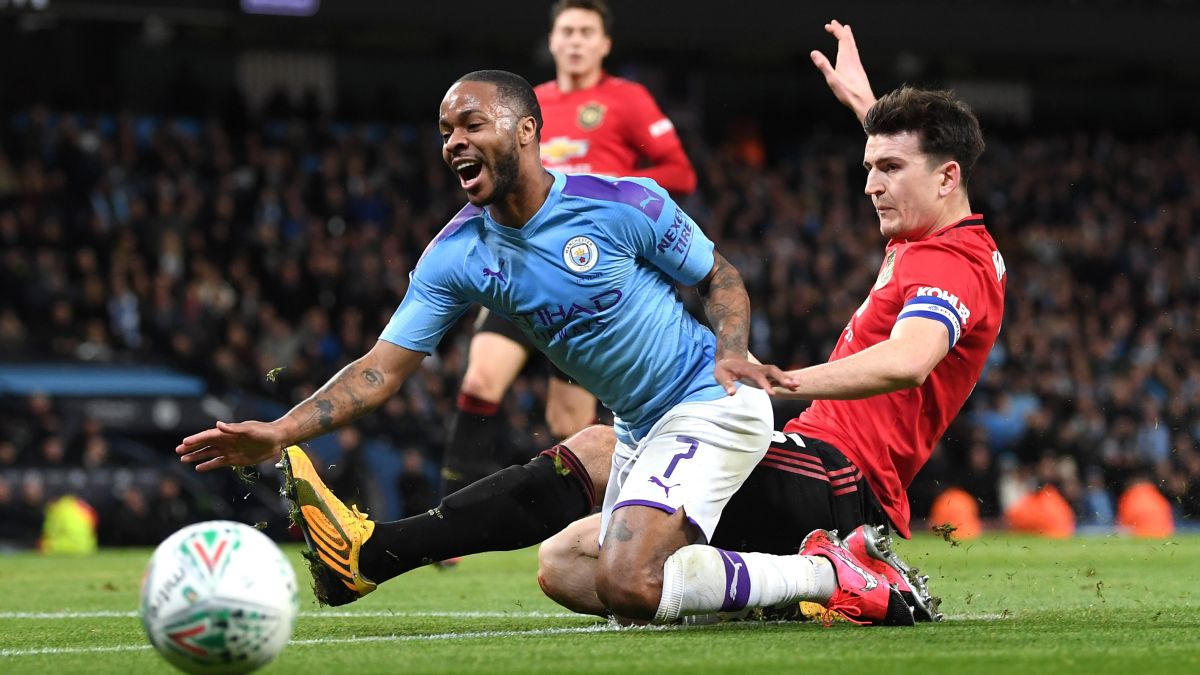 Manchester rivals United and City go head-to-head tonight as the two in-form Premier League sides battle it out for a place in the Carabao Cup final. Read on for your full guide to getting a Man United vs Man City live stream and watch this EFL Cup semi-final game from anywhere in the world. Coverage of the game is LIVE NOW all over the world, so don’t miss out!

Both teams come into this clash at Old Trafford after arguably their best results of the season so far, with City having notched up a barnstorming 3-1 win over Chelsea on Sunday and United having underlined their title challenge credentials with a battling 2-1 victory over Aston Villa.

While the official line from both sides will be that they’re prioritising their league endeavours, a one-off match between these bitter rivals with a Wembley final at stake will likely see both teams field relatively strong sides for the competition.

Indeed, both clubs have taken the tournament seriously in recent years, with the two combining to lift the trophy eight times in the last 12 years – City winning four of the last five editions.

United have an added incentive today, to, as they’ll be keen to avenge their 3-1 aggregate defeat at the hands of the Sky Blues at exactly the same stage of the competition last year. Indeed, while Pep Guardiola’s side has been a dominant force in English football since the Spaniard arrived at the Etihad back in 2016, United’s recent record against City is solid and they haven’t lost to their noisy neighbours in the last three meetings between the two.

Follow our guide below to get a Man United vs Man City live stream and watch this EFL Cup semi-final match-up, no matter where you are in the world right now – Wembley awaits the winner and the Carabao Cup action in Manchester is under way now!

If you’re out of the country when the game’s on, you’ll want a VPN so you don’t miss it. This’ll help you circumvent the geo-blocking that will try to stop you watching a Man United vs Man City live stream in particular parts of the world.

So as Virtual Private Networks are a legal means of getting around this issue, and it’s nice and easy to set one up. Here’s how it’s done.

Man United vs Man City live stream: how to watch Carabao Cup semi-final in the UK

Sky Sports has exclusive live broadcast rights to the Carabao Cup this year. The build-up for Man United vs Man City starts on Sky Sports Football and Main Event from 7pm GMT ahead of a 7.45pm kick-off.

That means you’ll need the Sky Go app for your phone or tablet if you’re out and about but still want to tune in to the 2021 Carabao Cup semi-final.

If you’re not a full Sky subscriber (and don’t want to be), then you can also consider buying a Now TV Sky Sports pass for streaming-only access to the match.

Outside of the UK tonight? Then you’ll need to download and use a VPN to access the same services you normally stream with (and pay for) at home.

How to watch Manchester United vs Man City: live stream EFL Cup 2021 in the US

Online subscription service ESPN+ has exclusive access to the EFL Cup and therefore is your destination for Man United vs Man City in the US.

It only costs $5.99 per month and allows you to watch online as well as via its mobile app and TV streamer apps on the likes of Apple TV, Amazon Fire TV, Roku, PS4 and Xbox.

Streaming service DAZN is the sole rights holder for live Carabao Cup matches this season in Canada and shows every single match, including this one, with kick-off scheduled for 2.45pm ET or 11.45am PT.

Better still, you can try DAZN free thanks to an ongoing 1-month FREE DAZN trial deal, which will also allow you to watch some 2020/21 Premier League action without paying a penny as well! If you decide to keep DAZN, you’ll pay $20-a-month or an annual subscription of $150 for all the games plus Champions and Europa League action, every NFL game, and much more.

DAZN is a great option for anyone wanting to watch the Premier League from Canada. It’s a slick service with comprehensive Premier League coverage and a range of handy apps for iOS and Android mobile devices as well as Amazon Fire TV, Android TV, Chromecast, Apple TV, and most modern Smart TVs.

How to watch a Man United vs Man City: live stream 2021 Carabao Cup semi-final in Australia

You’re looking at a 6.45am AEDT kick-off on Thursday morning Down Under. If you do manage it, subscription service beIN Sport 1 is showing the Carabao Cup final live.

If you’re a Foxtel customer, you can add beIN to your package for an extra fee. No worries if you aren’t though as you can also subscribe to beIN as a standalone subscription that can be watched on your laptop, desktop computer or mobile device. That costs $19.99 per month after you’ve taken advantage of a FREE two week trial.

Alongside these two, your other option is to sign up for the fast-emerging Kayo Sports streaming service, which features no lock-in contracts and gives you access to over 50 other sports including the F1, NRL, FA Cup football… the list goes on! Handy if you don’t want to go all out on Fox.

For those wanting to watch home coverage of sports from overseas, a VPN is usually the solution – and our latest January 2021 testing has current No. 1 pick ExpressVPN working brilliantly with the service.

Just like in Australia, beIN Sport has you covered for Carabao Cup football action in New Zealand.

Sky subscribers can add beIN to their package at an additional cost or, like in Australia, you can subscribe to a standalone package that can be watched on laptop, desktop or mobile app. It costs $19.78 per month after you’ve taken advantage of the FREE two week trial.

Kick off for Kiwi’s is at 8.45am NZDT on Thursday morning.

The Red Devils are set to assess Victor Lindelof after the defender missed the last two games with a back injury, while Ole Gunnar Solskjaer will once again be without new signing Edinson Cavani – the Uruguayan striker serving the second game of his three-match ban today.

On the opposite bench, City stars Kyle Walker, Ederson, Gabriel Jesus, Ferran Torres, Eric Garcia and Tommy Doyle were all unable to play against Chelsea after testing positive for COVID-19 and are likely to be absent from tonight’s team sheet as well.

How To Fix Problems Using A Restore Point In Windows 7

The Best Way To Solve Free Problems With Norman Antivirus 2011