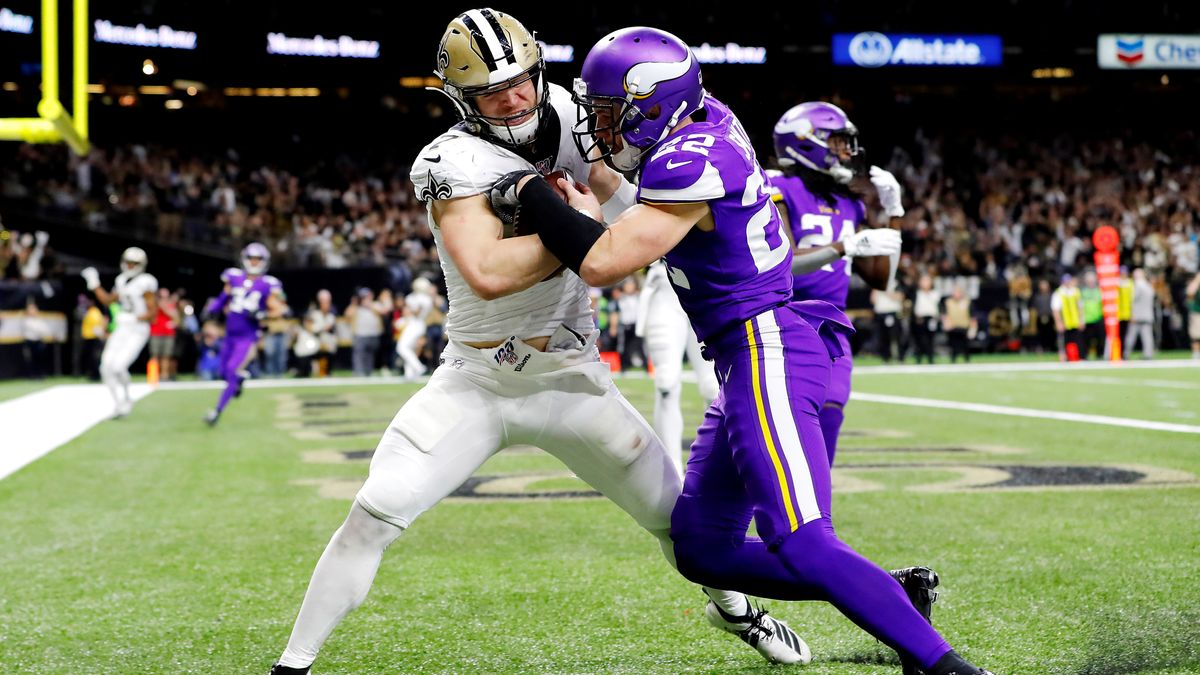 ‘Tis the season to be ruthless. Both franchises come into today’s festive clash off the back of defeats at the weekend, but the Saints are already guaranteed qualification to the playoffs and currently lead the NFC South. The Vikings’ beating by the Bears, however, looks like a costly one, and they’ve now got to win out and hope their rivals collapse in order to get back into playoff contention. Read on as our guide explains how to get a Vikings vs Saints live stream today and watch NFL Christmas Day Football online, no matter where you are in the world right now.

That defeat for Minnesota coupled with a win for Arizona dumps the Vikings two games behind the Cardinals, who now have the NFC’s seventh and final playoff spot in their grip, and one behind the Bears. But the race isn’t officially over yet, with the Cards still to play two tricky fixtures against the 49ers and Rams, and Chicago set to face the Packers next week.

The Vikes have a straightforward-looking final game against the Lions, but lose today and their season will already be over by then.

The Saints have been enjoying a magnificent campaign but they’ve lost some momentum of late, in part because of a big injury to Drew Brees, and in part because they had to play the Chiefs at the weekend.

Brees finally made his return to the field in the defeat, but didn’t look comfortable at all, failing to complete a pass until the second quarter. Understandable really, considering the 41-year-old broke 11 of his ribs last month.

That should give the Vikings a glimmer of Christmas hope, but the Saints have motivation of their own, with the Seahawks threatening to leapfrog them in the standings. Follow our guide below as we explain how to watch the Vikings vs Saints online and get an NFL live stream wherever you are for Christmas Day Football.

How to watch the Vikings vs Saints from outside your country

If you’ve mismatched a holiday or you’re away on business and you want to watch your country’s coverage from abroad, then you’ll need to use a VPN. This will help you dial in to a location back in your home country to avoid geo-blocks and regain access to the content and services you already pay for back home.

A VPN is generally perfect for this as it allows you to change your IP address so you appear to be in a completely different location when the big game is on.

Use a VPN to watch NFL football from anywhere

Once you’ve chosen and installed your VPN of choice, simply open the service’s corresponding app, hit ‘choose location’, select the appropriate country, and you’ll be able to watch the broadcast as if you were back at home.

If you’ve got Fox Sports as part of your cable package, you can stream the match online via the Fox website, and if you don’t have Fox or NFL Network, you can tune in for free by taking advantage of the famous FREE Amazon Prime trial offer ($12.99 a month on a contract-free basis thereafter) – or by turning to Sling TV, which offers Fox in most major metropolitan markets and also features NFL Network as part of its Sling Blue package – try a free Sling TV trial today.

How to watch Vikings vs Saints FREE without cable

In general though, we recommend fuboTV as the best to watch NFL games without cable this season.

That’s because for complete coverage of all nationally televised NFL games in the 2020/21 regular season without cable, you need access to Fox, CBS, NBC, ESPN and NFL Network – and only fuboTV currently offers them all to the best of our knowledge.

Pricing starts from $64.99 a month, which is a darn sight cheaper than cable, and there’s even a FREE 7-day fuboTV trial you can take advantage of. That means you can watch today’s game without paying a penny.

One of the things we love about fuboTV is that it makes canceling easy if you decide it’s not for you – and it’s easy to get started, too, thanks to a slick payment system that accepts internationally recognized payment platform PayPal as well as major credit and debit cards.

Don’t forget, you can take your favorite NFL streaming coverage with you wherever you are with the help of a good VPN – try the best around, ExpressVPN 100% risk-free for 30-days.

Not interested in signing up for cable or for a streaming service? Yahoo is showing every NFL game that’s being broadcast in your local TV market for free through its Yahoo Sports app, including the Minnesota Vikings vs New Orleans Saints game.

Today’s Vikings vs Saints clash kicks off at 4.30pm ET/1.30pm PT in Canada, and TSN, CTV and RDS are providing linear TV coverage.

When it comes to streaming though, Canadian NFL fans are some of the luckiest in the world, as DAZN includes coverage of every single 2020/21 regular season game.

That obviously means the Vikings vs Saints game is covered, and it’s an absolute steal as DAZN costs just CA$20 a month or $150 a year – there’s even a free DAZN trial deal currently running that will get you access for nothing!

Not only do you get every single NFL game, including NFL Game Pass and RedZone access, but DAZN’s also the exclusive Canadian streaming home of Premier League and Champions League soccer!

Saints vs Vikings live stream UK: how to watch the NFL online tonight

UK-based American football fans can watch up to six NFL games live and in their entirety each week courtesy of Sky Sports, with the network now boasting a new dedicated Sky Sports NFL channel as well as offering access to the live RedZone highlights show each Sunday.

This includes tonight’s New Orleans Saints vs Minnesota Vikings game, with kick-off set for 9.30pm GMT on Friday evening. It’s being shown on both Sky Sports NFL and Sky Sports Main Event. The build-up starts at 9pm on both channels.

If you don’t already have Sky and aren’t up for subscribing, you can also try a Now TV Monthly Pass.

Or better still,  tune in through the NFL Game Pass Pro, which is now down to just £1.99 a week or £50 through July 2021, getting you every single game of the 2020/21 season (subject to blackouts) including the playoffs, Super Bowl, RedZone access and more!

Not in the UK but still want to catch the action on Sky or Game Pass? Then grabbing a VPN will let you log into a UK IP address so you can live stream NFL as if you were at home.

How to watch Saints vs Vikings: live stream the NFL in Australia

If you live in Australia and want to watch the NFL this season, you have several options to do so and are well covered for the Saints vs Vikings game, which is scheduled to start at 8.30am AEDT on Saturday morning.

ESPN, available through Foxtel, is broadcasting the game, and you can also stream it to your laptop or mobile device using the Foxtel Go app, but you’ll need your Foxtel ID to access the app.

Kayo Sports is showing the Saints vs Vikings game too, and is the ideal option for those who don’t want the commitment of a lengthy (and pricey) contract.

However, for the proper, live-for-it NFL fans, we highly recommend you sign up for an NFL Game Pass as it is also available in Australia, and even though it is marginally more expensive you have a much wider range of features.

Should I buy an NFL Game Pass?

Watching NFL online has never been easier thanks to the wide variety of streaming services now available. However, the league also has its own streaming service called the NFL Game Pass which allows die-hard football fans to watch every game.

It’s really geared towards international fans and that’s where it’s a great option. In most of the NFL’s main international markets, a Game Pass Pro subscription will get you access to every single regular season and playoff game live, plus the Super Bowl, and you also get the league’s live highlights show, RedZone. It’s now down to just £1.99 a week for the closing stages of the regular season or £49.99 through July 31, 2021 – so if you’re a big fan who watches multiple games every week, it breaks down quite favourably.

As well as the UK and Ireland, the service is available in countries like Mexico, Germany and most of Europe, and Australia – with only ‘domestic markets’ the US and Canada missing out on the full-fat offering.

Instead, there’s a US and Canada-only Game Pass option available for $49.99 through July 2020 that lets you watch commercial-free full game replays right after they’ve finished. Not the worst offer we’ve ever heard, but don’t get caught out – GamePass does not offer live NFL games in the US or Canada.

Should you decide to give Game Pass a shot, apps for Android and iOS mobile devices as well as on the likes of Chromecast, Apple TV, Roku, PS4, and more – plus you can obviously watch on your laptop or desktop computer through a browser.

The only caveat for non-domestic markets (e.g. the UK) are that some games are subject to blackout restrictions due to deals with local pay TV providers (such as Sky).

Are You Having Trouble With SIP Error 401?